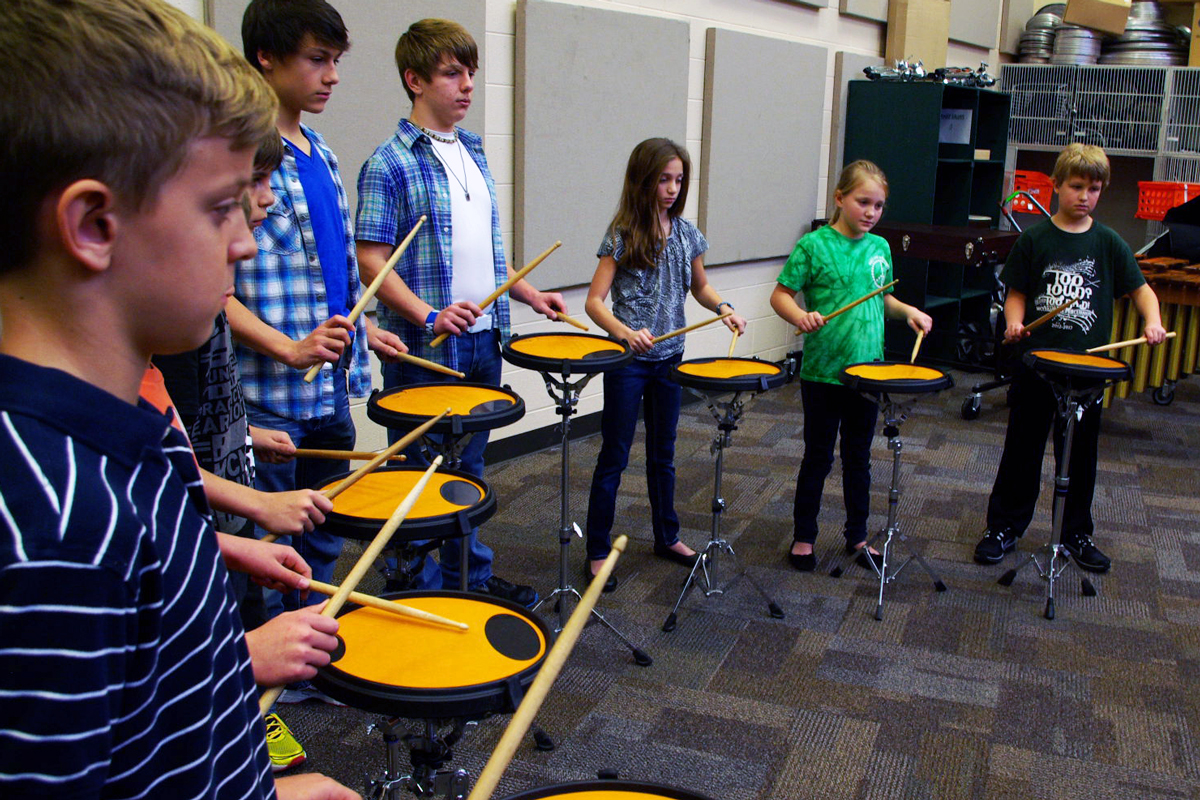 The Rat-Pad is your silencer. They won’t hear themselves as well, so just make sure they focus on their stroke rather than their volume. The overlay also takes away rebound, so hold on with those back fingers and be ready to work!

Level 1 makes use of the Rat-Pad’s silencing aspect. Kids are more likely to engage if they know their mistakes won’t be noticed as much. I accept all levels of participation in the early stages — whatever gets their hands moving! We can refine later.

The main purpose of Level 1 is to make sure everyone can play the exercise, taking time to define stickings and heights.

Think of Level 1 as a security blanket—the confidence of the stronger players will soon spread to the weaker players.

To start transitioning to the next tier, begin removing the overlays from the students who are exhibiting more proficiency. The overall class effort will increase with everyone wanting to be the next one to “graduate.” When all Rat-Pads are gone, that means everyone can play the exercise. Time for Level 2!

The orange gum rubber surface has more rebound and is more audible than the Rat-Pad. The rubber will do some of the work now, making the exercise seemingly easier to play.

Level 2 is the proving ground with increased accountability. Here, we address the differences with the new surface first, especially in terms of grip, stroke, and rebound, so as to remove any bad habits.

Mistakes are more obvious on this more exposed surface, requiring a higher level of accuracy. You can now focus on higher level concepts, such as stroke expectations, hand to hand transitions, clearer height definition, etc.

To start transitioning to the next tier, begin moving kids up to the Darkmatter surface once they exhibit signs of near mastery. The first kids to transition will be more audible than the rest. These are your leaders! You’ll want to address the differences between surfaces before transitioning.

The Darkmatter surface provides the clearest sound and has less rebound, more closely emulating a natural snare drum rebound. This will require a little more work, but that’s not a bad thing. No security blankets here, folks. They are fully accountable!

Level 3 represents the ultimate goal of the three-tiered achievement system: everyone on the Darkmatter oval displaying full mastery.

There’s no room for anyone to hide. And if the kiddos truly earned their way to Level 3, they won’t want to!

Level 3 is where we can address more nuanced listening skills, encouraging ensemble awareness, and musical maturity.

And there you have it—a three-tiered achievement system making full use of the unique playing surfaces available from the Tap-Off / Rat-Pad combo!

The most surprising result I’ve seen in this approach is an immediate improvement in the level of engagement among students who’d normally appear either overwhelmed or disinterested. Allowing them to hide a bit initially as they get started can make a huge difference in building confidence. This system gives them that helping hand to get off the ground!

Here’s an example of some of the pad exercises from Five Minute Drill being performed in the classroom with all students having graduated to the Darkmatter oval. Enjoy!

Ralph Hicks is a music educator from The Woodlands, Texas, and is the founder and Executive Director of Let Them Drum, a 501(c)(3) non profit corporation. With over 20 years of public education experience, Mr. Hicks regularly presents educational clinics and workshops across the country. In 2012, Mr. Hicks was named Teacher of the Year at Mitchell Intermediate School and named Conroe Independent School District’s Outstanding Teacher in the Arts by The Woodlands Waterway Arts Council.